Here’s what I’ve discovered about a possible identity scam, the latest in a string of such scams to target translators.

I never received the email, but a familiar colleague posted in The League of Extraordinary Translators on Facebook to say she’d received an email from Lingorate. The email said “Your LingoRate profile is ready to promote your services!”

Not too offensive, I guess, except that she didn’t ever sign up for a profile on Lingorate, and she certainly didn’t consent to being rated by any old Tom, Dick or Harry on the internet. And why would she?

I did a quick search, trying my own name to see if they’d taken my name from somewhere to, and lo-and-behold, they had. 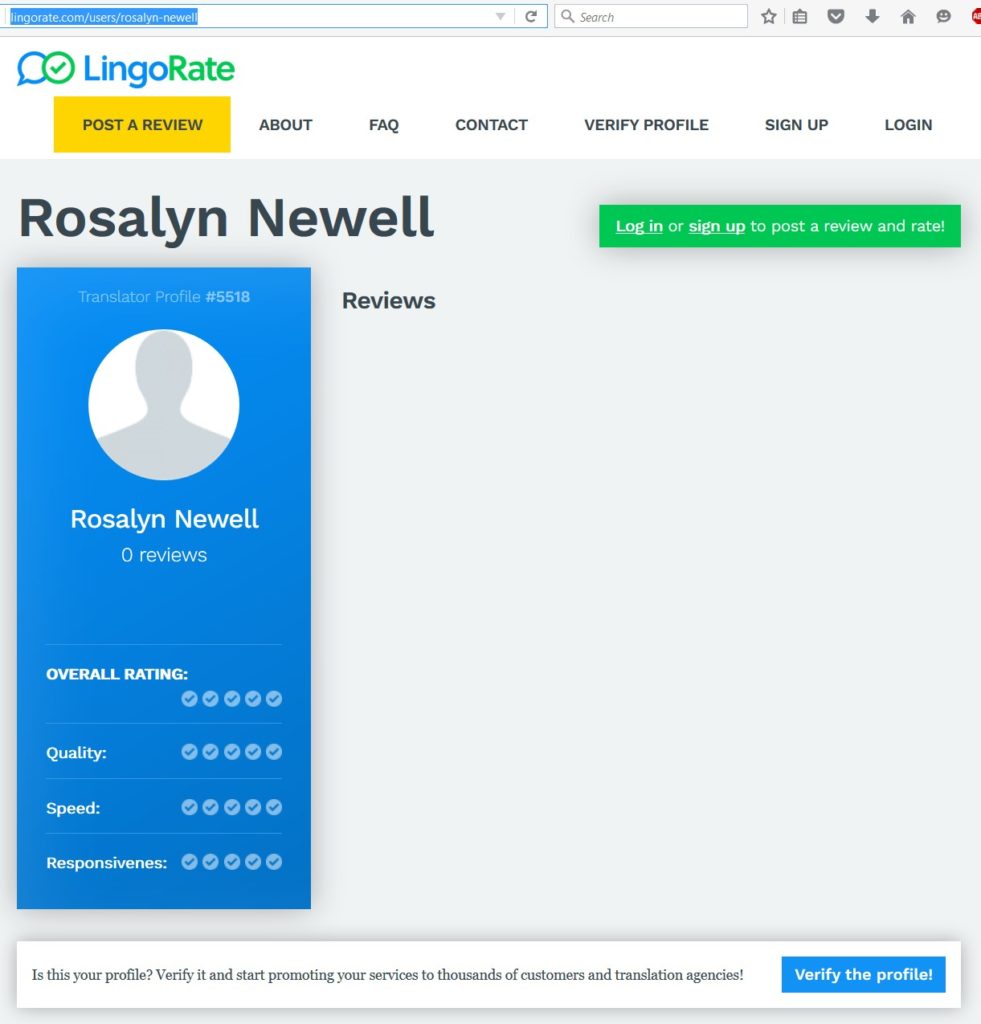 They have my legal name, which I don’t actually go by in the translation profession. Unusual name, so it must be me. But how?

They have my legal name, which I don’t actually go by in the translation profession. Unusual name, so it must be me. But how?

Well, that’s dodgy. I didn’t even receive the friendly email from Lingorate HQ.

See that verify link at the bottom? This is what you’ll find: 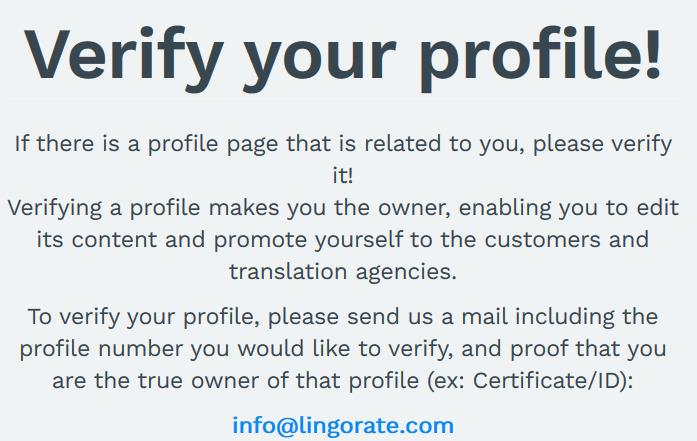 Look at the information they request. Your certificate and/or ID? There’s a lot someone can do with that.

Okay, so they want my ID. Who the hell am I sending that to? Well, there’s no information on the website (well that’s dodgy), so I had a look at the WHOIS record. That’s the record associated with any website that will tell you whatever information was provided in order to register the site. 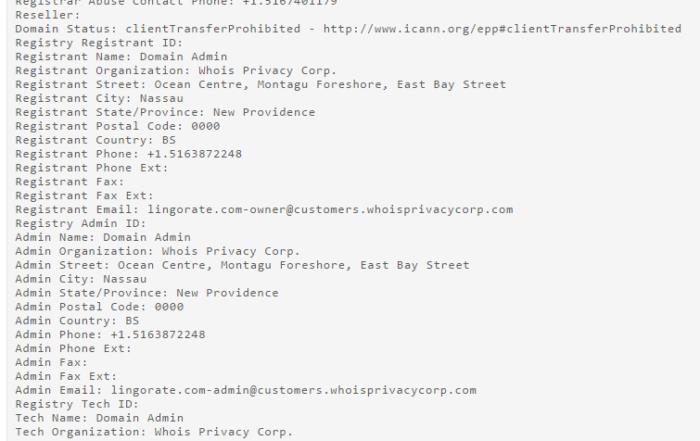 The WHOIS record for the Lingorate domain. They’re somewhat more careful with their own identity.

Let’s check out the reviews already on the site. If my inkling is right, those, too, will be obviously fake. 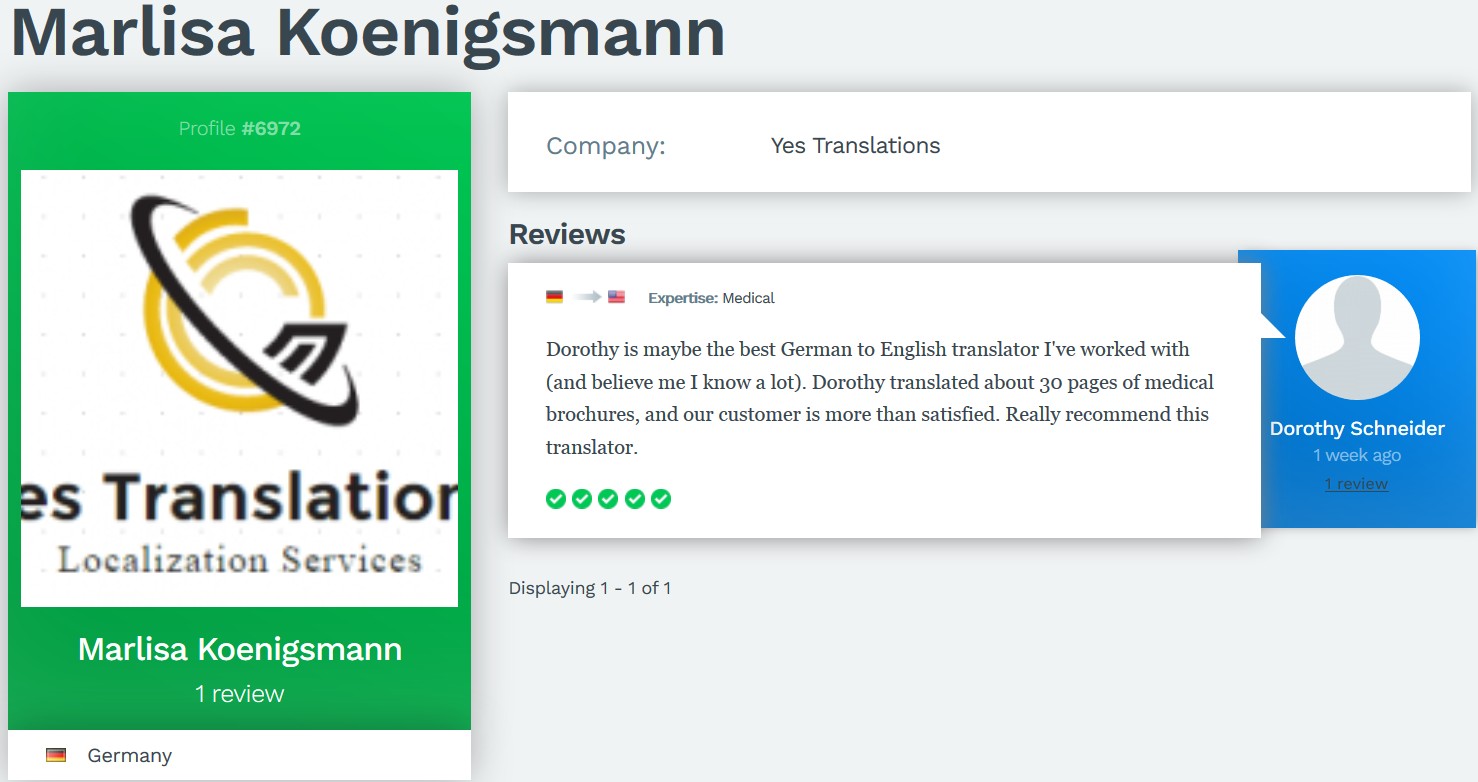 This name appears nowhere else in connection with translation. The “logo” still has the grid points visible.

All the reviews I found were very new, from and for people and names I couldn’t find anywhere else on the internet. Companies were either not mentioned, or they’d be like this: obviously fake images where the grid points from whatever editing program they were using were still evident.

Okay, by this point, it’s clearly a scam. I think to myself it’s probably an identity theft scam if they want a copy of your passport, or perhaps an extension to the existing CV scam if they are also interested in your degree certificates. By this point, I’ve sent them a warning to remove my profile and that of anyone else who has not consented to being on their site, or I’ll use my industry chops to expose them. That’s what I’m now doing, so as you may have worked out, they never responded, nor did they remove my profile.

So I head on over to Twitter, which is where I often go when it’s time to expose something or check if others have thought the same. A quick search for Lingorate reveals something rather odd… 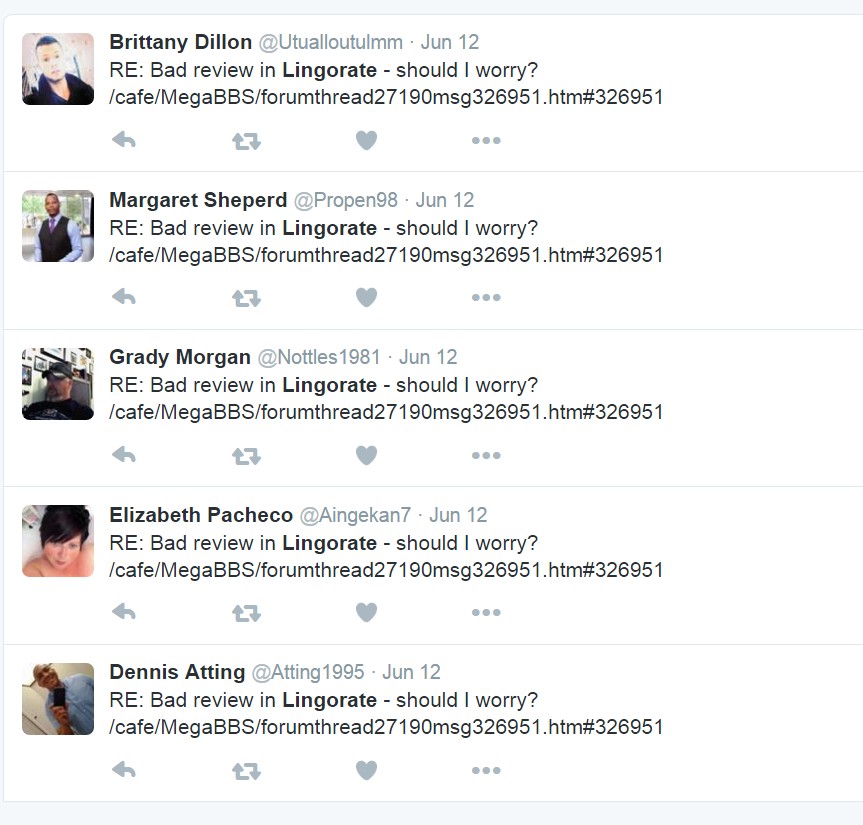 Checking to see if anyone else had mentioned Lingorate or the apparent scam on Twitter, I found further confirmation. Fake accounts all sharing the same broken link. But there’s a title…

See those? Fake profiles. Okay. Curious. I search for the title of the article at this broken link and find this…

Mr Keller is concerned about a bad rating he’s received on Lingorate. The translators are abuzz with curiosity!

Oh, poor Mr Keller! He’s a poor concerned translator who’s found an agency he’s worked with has given him a mediocre rating! Four pages of discussion, and apparently nobody thought to look the guy up… 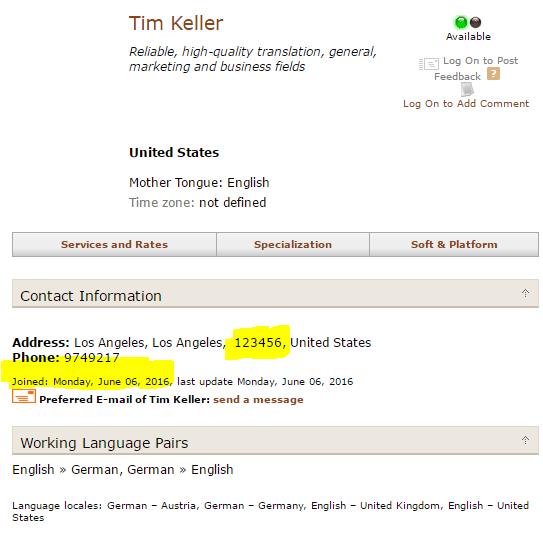 It looks like Mr Tim Keller only joined the site just before posting this ‘promotional’ post on the forum. Check out the ZIP code.

Oh look, he’s only just joined the site. What an interesting ZIP code, too!

The discussion continues, and apparently nobody has worked out the OP is an obvious fake. There are the usual discussions of quality, and ultimately someone brings up the quite justified complaint that Mr Keller should not have been included on the site in the first place without his permission. Oh no! Well that’s a PR crisis in the making for the people behind Lingorate! But never fear…